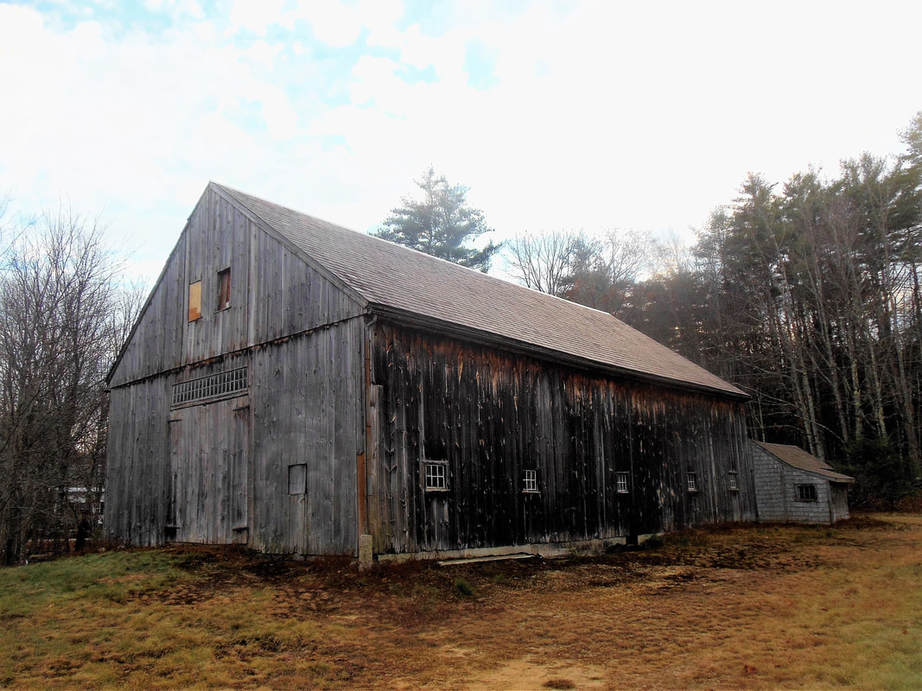 The New England Barn style replaced the English Barn during the period between 1830 & 1860.  The primary difference was that,
on the New England Barn, doors were located on the gable ends rather on the side walls.  The New England Barn was also larger,
​36'- 42' wide by 80' - 100' long,  and often included a basement.  A horse and wagon could enter one end to service the entire
length of the barn and then depart from the door at the other end.  These changes reflect the shift from solely subsistence
​farming to more commercial farming.
The New England Barn contains these features:  sawn rather than hand-hewn timber,  common rafter roof framing with purlin plates, straight posts rather than flared "gunstock" posts,  and dropped tie-beam framing with purlin plates rather than the
English "tying joint".  The siding was initially of wide vertical wood boards but later of wood shingles.  Wood shingles typically covered the roof until metal roofing became available.  The roof overhang was up to 12".  Cupolas were added later in the
19th Century to ventilate the interior of the barn and to prevent moisture building up.  Scarf joints were sometimes needed to
​join  timbers longitudinally since the larger barns were longer than available lumber.
​
Doors hung on the gable ends, either by hinges or rollers, also reduced the accumulation of both rain and snow which occurred
at the entrance doors of the English Barn.  The basement, built with dry-laid field stone,  was for manure management and was accessed by trap doors from the floor above.  Hay, as normal, was stored in a loft above the main floor.  Cow stables were included in the New England Barn, which resulted in the need for a taller form than the English Barn.  Cows were primarily located on the warmer southerly side of the main floor with ventilating windows in each stall.  Hay and other farm storage was located on the cooler side.  Barns, often unpainted, were sometimes painted a red color.  One type of the New England Barn was built into the
​side of a hill to provide access to the basement level, entered generally by a ramp rather than a bridge.
The New England Barn evolved into the Gambrel Roof Barn in the early 20th Century.

Click on the horizontal 3-dash icon at the top of the page and scroll down to view all other articles.