An earlier article provided a general history of the barns in Maine.  This article contains more detailed information and images. on the English Barn. 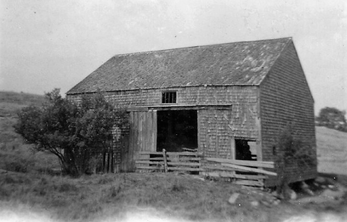 The  English Barns were normally located on level land and were without basements.  The early barns were built using historic
English design dating back to the Medieval era, and were brought to North America by immigrants.  The term 'barn' was derived
originally from the Roman word granum and later from the Old English word bere,  both words meaning barley and grains in general.  Hay was not originally stored in barns.
​
The free standing English Barn, built on a sunny courtyard, was normally 30' x 40' in size, with simple gable ends and a  loose
granite foundation.  A pair of large hinged or sliding doors were located on one or on both of the side walls below the eave.  The barn floor was subdivided into three bays:  a central threshing floor and two equal side bays.  One bay, for livestock, was located
on the warmer southerly side. The second bay, for hay, grain and other fodder, was normally divided by a waist-high wall.  Lofts for
hay were located over the side bays and were framed with small rye beams placed loosely enough to allow ventilation from below.  The wood threshing floorboards were fitted tightly to prevent the loss of grain.  The opposite doors allowed cross ventilation for
the hand threshing, a process which lasted until about 1820.  A high sill prevented the grain from blowing out of the barn  - i.e. threshold.  A small lean-to shed was sometimes added to the side of a barn.  The first barns were without windows but,  after
the early 1800's,  divided glass transom windows were added over the doors and small windows high on the gable ends.
​
Before 1810, early timber framing of the English barn was constructed with flared hand-hewn hardwood "gunstock posts" with an complex "English tying joint" which connected the posts, wall plates, and major rafters using "rose-head" wood nails.  The posts were 8" x 8" at the bottom and 8" x 12" at the top.  A Roman numeral,  known as a "marriage mark",  was stamped on each joint.  The roof was constructed of rough sawn rafters with wide ridge boards secured with wooden pegs and covered with hand-split wood shingles. The exterior was sheathed with wide wood boards attached with square headed hand-cut nails, and were attached with spaces between to allow ventilation between the joints.  The wood sill rested on the stone foundation. Between 1810 and 1840, machine cut nails began to be used, together with uniformly sawn posts.
The English Barn after 1830 gradually became too small for the increased farming activities and was replaced by the New England Barn.  A future article will provide in formation on this new type of barn. 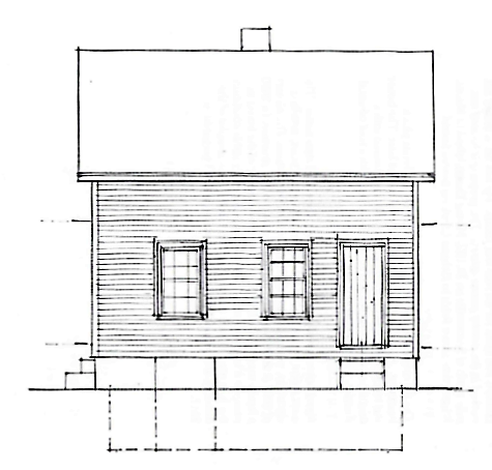 ​Click on horizontal 3-line icon at top of page and scroll down to view other articles.   Contact:  frederick@biebesheimer.com
Powered by